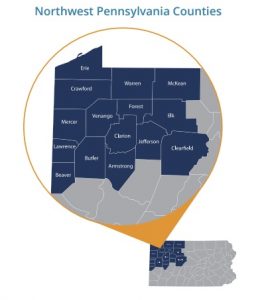 The Northwest Pennsylvania (NW PA) Veteran Suicide Prevention Program operates on a three-pronged approach involving healthcare providers, community organizations, and Veterans and their families in the 15 counties of NW PA. The “Person-First” series chronicles the lived experiences of Veterans committed to reducing suicide deaths of those who have served in the armed forces. In this article, former Army medic and Air Force civil engineer Phillip Allan speaks about his struggles with reintegration into civilian life and how Project Healing Waters provided the support and community he needed to regain his health and well-being.

Simple Interactions Can Save Lives

Veteran Phillip Allan and his service dog, Radar, at the PHWFF Steelhead Slam event on October 29, 2022.

Phillip Allan spent more than two decades in the United States Military, serving for 13 years as an Army medic with the 82nd Airborne Division, followed by ten years as an electrician and civil engineer in the Air Force. Phillip deployed to the middle east multiple times in support of Operation Desert Storm, Operation Iraqi Freedom, and Operation Enduring Freedom before leaving the military in 2009.

Describing his first few years of transition back to civilian life, Phillip says, “I really felt like I was going crazy.” He described struggling with symptoms of TBI and PTSD, which hadn’t been identified or diagnosed at the time. Feelings of paranoia, flashbacks, loss of memory, and confusion led him to feel isolated, and he turned to heavy alcohol use to cope.

It wasn’t until 2014 that he stumbled upon the Project Healing Waters Fly Fishing (PHWFF) program in Erie, PA. Phillip was leaving an appointment at the VA Behavioral Health Clinic when Skip Hughes (former PHWFF program lead) approached him and asked, “Do you want to come tie flies with us?”

Reflecting on this moment, Phillip says, “I never would have guessed that such a simple interaction could save my life, but it certainly has. At that point in my life, I was actively suicidal. My involvement with PHWFF has changed all of that.”

Phillip joined the PHWFF group to tie flies that day and has been an active member of the program ever since. In addition to participating in local programming such as fly tying and rod building workshops and fishing excursions, Phillip has also had the opportunity to travel with PHWFF at the national and international levels, with a trout fishing float trip down the Missouri River in Montana in 2014 and a 10-day trip to Norway in 2018 to try his hand at fishing for Atlantic salmon.

He says that his participation with PHWFF has helped him realize he’s not alone and that other people are struggling with the same thoughts and feelings that he has. “Fly fishing allows me to get out of my head while learning new skills and being productive.”

The NW PA Veteran Suicide Prevention program team had the chance to join Phillip and the Erie PHWFF group last month at an annual event in Erie County called the Steelhead Slam! Event participants met at Folly’s End Campground to gear up and head out into the waters of Elk Creek before the sun came up. In the stillness of the morning, with the rustling of the leaves, the freshness of the chilly fall air, and the flow of the creek waters, it was not hard to understand the therapeutic nature of this sport.

Following the fishing excursion, a warm meal was served to build upon the camaraderie of the day. The Veterans and volunteers sat under a pavilion, ate, and shared fishing tales. Following lunch, Craig Brandick (PHWFF Erie Program Lead) led the group in a friendly fly-tying competition dubbed the ‘Steelhead Slam Iron Fly,’ where competitors were given a small bag of supplies and 5 minutes to tie their best fly. The flies were then judged based on design, creativity, and fishability, and a winner was announced – Veteran Darryl Mosher.

What a great way to spend a Saturday! We are so thankful to the staff and volunteers at PHWFF for creating these fantastic opportunities for our Veterans – and for including us in their latest adventure!

Project Healing Waters Fly Fishing, Inc. (PHWFF) began in 2005 serving wounded military service members at Walter Reed Army Medical Center returning from combat in Iraq and Afghanistan. Since then, PHWFF has expanded nationwide, establishing relationships with Fly Fishers International, Trout Unlimited, and independent fly-fishing clubs to conduct the program at Department of Defense and Department of Veterans Affairs facilities across the country. PHWFF volunteers include experienced fly fishers and guides who donate their time and knowledge to conduct these programs. PHWFF is recognized as an innovative leader and model in the field of therapeutic outdoor recreation for the disabled through its successful application of the sport of fly fishing as a rehabilitation tool. To learn more about PHWFF, visit their website at https://projecthealingwaters.org/